Pay Per Click advertising via keywords, UK and EU law

Pay per click advertising effectively reaps instant rankings and helps enterprises take up more of the SERP. Together this increases brand awareness through keywords alone. SEO, however, still gets more clicks compared to PPC.

Legally keywords fall under trade mark law as they provide huge economic benefits. In fact, collectively, intellectual property is the biggest investment any company has because your brand can, in itself, sell your product(s) and/or service(s).

The list of digital assets is extensive. Web pages as a single digital asset includes various elements, for example, store location pages, category pages, product pages, reviews, holiday promotions, sitemaps and semantic make up. Simply by knowing your digital presence you should also know a list of your digital assets which you can monitor and therefore protect.

Trade mark infringment can occur on organic search and pay per click advertising. Web search keywords, more specifically branded terms, are your digital trade mark and these can be infringed, just like traditional trade marks, such as, a logo, for instance, if best practices are ignored.

In the early days of SEO it was possible to include keywords in the keyword HTML tag to improve your rankings, in fact, Bing and Yahoo still place a very small weight on such keywords, however, Google now ignores this tag and any weight placed by Bing and Yahoo is only going to come into play if another web site has the exact same on- and off-page ranking factors. Legally you are not allowed to include your competitors keywords to rank for their brand name in organic results because it is misleading to the searcher.

Pay Per Click advertising systems must be clearly labelled as “ads” and it is legal in the UK and EU to bid for your competitors keywords because PPC’s system distinguishes their results as paid adverts. For this reason PPC systems will always have to distinguish ads, in the form of labels or typography, for example, however this area is growing in case law, as outlined in 3 legal, summarative, case studies below:

European Pay Per Click advertising legal case study
In Germany a court ruling, May 2014, concluded that trade marks with reputation should be more difficult to bid for by using PPC. The German court heard that Eis.de had dramitically reduced the prices of a rival brand, Beate Uthse, and advertised this through PPC. The Frankfurt court ruled that Beate Uthse’s trade mark may be percieved negatively to the average searcher and therefore proving reputational damage is key to taking such a PPC case to courts.
Amazon and an EU wide ban
Amazon was banned throughout Europe from infringing a UK cosmetic company, Lush, after bidding for Lushes’ products and stating they were on sale when in fact they were not on sale after redirecting search engine users to Amazon’s internal search engine and in Google’s sponsored search results. After an agreement could not be reached between Amazon and Lush the case went back to the High Court and a EU wide injunction was issued to overcome Amazon’s technical difficult counter-claim.
UK PPC competitor keyword bidding
A 2013 legal dispute between Marks and Spencers vs Interflora came to a firm conclusion under British law: Bidding for competitors’ PPC keywords is legal so long as the trade mark is not underminded by the PPC advert through searcher confusion over who is selling the item, in this case flowers.

Bidding on competitors keyword using PPC is growing in case law and, therefore, must be continually monitored to find out the latest legal grounding.

Do you bid using PPC on competitors keywords? Tweet Gerald.

Is the internet a human right?

The web since its inception, circa 1990, has: grown quickly; reshaped shopping; and is going to continually change our lives for generations to come through the internet of things and, for example, wearable technology. Is web access a human right? Do we have the right to access the internet?

The internet, a human right?

Moral principles are human rights and are protected by various laws, such as, for instance, the US Constitution or the Human Rights Act (1998) in the UK.

International human rights include: right to life; freedom from torture, cruel, inhuman and degrading treatment or punishment; the right to liberty; right to self determination; freedom of expression; right to work; right to an education; minority rights; group rights; and looking to the future. Not everyone, however, has these rights, for example, North Korea or more recently reported — Syria. 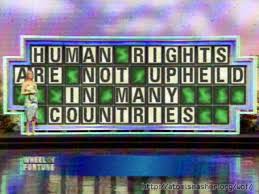 Photo text reads “Human rights are not upheld in many countries”. Copyright of Atom.Smasher.com, reused, unedited with citation through Creative Commons Licence.

The internet and human rights

Arguably the internet allows us to express views and political debate through freedom of expression so the internet may be seen as a human right. On the contrary we cannot freely search for information on, for example, search engines because personalisation technology heavily influences results and restricts us in filter bubbles. We are therefore not completely free on the web.

In real life, so to speak, we have the ability to wear what we want and for the most part live where we want to. This is in part freedom of expression. Our clothes are in fact an expression of ourselves. This is not the case online because technology itself influences and controls everything. We are not free on the web.

Wicker and Santoso (2013) examined whether or not the internet was a human right. Despite their work being flawed and inaccurate, since it did not analyse technology itself leaving out, for instance, how personalisation technology restricts us from freely accessing information, or, more broadly, the fact that web search engines are not global search utility programs because we each search for localised or, at least, country specific pieces of information. Their work, however, did make 2 good points:

The UN passed a motion in Geneva to state that the internet is a basic human right that should be guaranteed by various countries. This does not mean that the internet is a human right, just as the example of the horse above is not a human right. The UN also claim that global warming is real but in fact global warming does not exist because ice caps, for instance, are getting bigger as supposed to shrinking and fading away in the global “heat”.